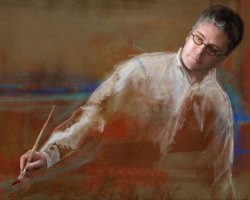 Willam Branson III is an international portrait artist whose portraiture is quite unique.  He has dedicated his life to hard work, experimentation and the pursuit of excellence, a profound commitment that has made him one of the world’s foremost portrait artists.  Clients travel from as far away as Holland, Germany, South Africa, Japan and South America as well as from all over the United States to sit for their portrait.  His paintings
fascinate many and have been described as being “some of the most engaging and enthralling portraiture ever seen.”

Mr. Branson’s inspiring images have garnered him some of the highest honors the portrait profession has to offer.  He was invited by 40 leading photographic artists to join them as an elite member of the oldest and most prestigious organization in the world...Cameracraftsmen of America, and he is a member of the Professional
Photographers of America and a founding member of the International Society of Portrait Artists.

The Royal Photographic Society of Great Britain, of which Mr. Branson is one of a few members from the United States, selected him to join other top world artists to exhibit their work throughout Europe.  All four of Mr. Branson’s submissions were selected for the exhibit, a very rare feat!  The Queen of England is the honorary chairperson of this society.

Mr. Branson was recognized as one of the Outstanding Artists of the 20th Century by the International Biographical Center in Cambridge, England.  He has been recognized by Fuji Photo Film, USA Inc., Eastman Kodak Company and has exhibited at the Epcot Center in Florida.

William’s ongoing passion for portraiture has taken him across the world to study the paintings of Rembrandt, Vermeer, John Singer Sargent and others.  His beautifully idealized images convey a sense of timeless elegance and grace.  Mr. Branson’s portraits have been sources of inspiration for others and his unmistakable style is often imitated, yet no one has achieved the level of international acclaim like William Branson III.

For the very discerning client, Mr. Branson can create one of his original paintings from the photographs he takes.